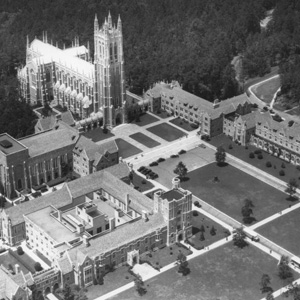 The Black History at Duke Reference Collection chronicles the integration of Duke University. This history includes the Silent Vigil; the Allen Building Takeover; the creation of a Black Student Alliance; the development of a Black Studies Program; interactions between the university and the Durham community; as well as individual efforts from students, faculty, and administrators. The collection contains publications, fliers, reports, memos, handbooks, manuals, lists, clippings, and a bibliography. Major subjects include black students, civil rights demonstrations, and the effects of desegregation on administrative policies. English.

In 1968, there were discussions on campus about establishing a black studies or Afro-American studies program, but no action was taken by the university. One of the demands of the students who took over the Allen Building on Feb. 13, 1969, was for the establishment of a fully accredited department of Afro-American Studies. On May 2, 1969, the Black Studies Committee submitted a proposal to the Undergraduate Faculty Council of the Arts and Sciences for the creation of the Black Studies Program and the courses were approved by the curriculum committee. Walter Burford was named program head in 1970. The third series, Black Studies Program, chronicles some of the history of this program and includes drafts of proposals, enrollment statistics, flyers, photocopies of clippings, and other materials.

The fourth series, Student Groups, contains materials from a variety of groups. Included are: the Afro-American Society, the Association of African Students, the Black Student Alliance, the Black Graduate and Professional Student Association, Black Fraternities and Sororities, and others. The fifth series, Public Forums, includes materials on a number of speakers, rallies, demonstrations, boycotts; one newspaper advertisement; and one Internet site. The sixth series, Clippings, contains mostly photocopies of newspaper articles. The clippings are from 1967-2001 and undated, and cover a wide variety of topics. Of note is a series of articles that appeared in the Chronicle, "Black and Blue: Blacks at Duke," Feb. 13-Feb.17, 1984.